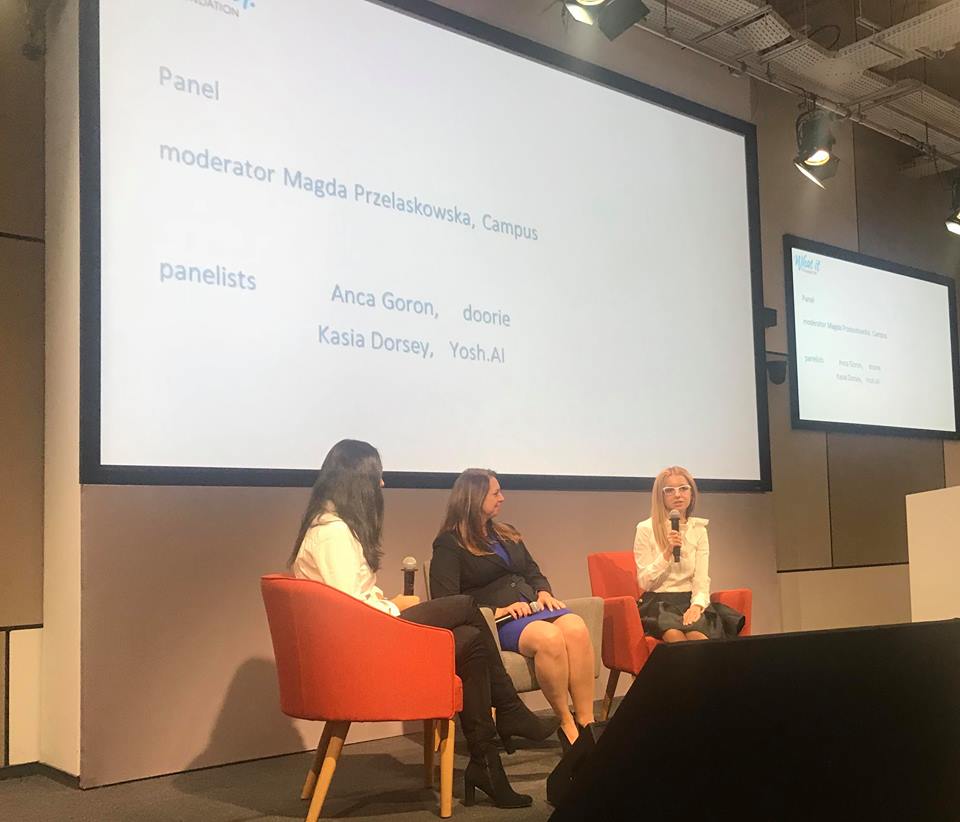 The Go Global Forbes 100 European Female Founders in Google Campus, Warsaw, didn’t go as planned. Still, because it was organized by a startup community, no surprise turned out to be surprising enough for the people accustomed to reacting quickly. When it became clear that the main panelists, Scapade’s Marjorie Perlas and Pelvifly’s Ula Herman, were not available that evening,  replacement was organized immediately. The seat of the panelist was taken by Kasia Dorsey, the host of the event and the founder of yosh.ai, this year’s winner of Women Startup Competition Semifinals in Warsaw. Along with an yosh.ai teammate Renata Bogdańska, Kasia launched What If Foundation that covers the organisation of all the Go Global meetings with female founders and successful women in general.

When it comes to the second missing panelist, it was Forbes magazine who helped save the day. Sara Koślińska, the co-founder of Limitless app and one of the ’30 under 30′ of the Polish edition, connected with us online and gave Kasia a brief interview. Her well-deserved fame and recognition in the startup community could be heard in the shape of a gasp that the crowd let out each time the connection got a bit slower and Sara’s face froze on the screen for a few seconds.

Other key speakers were Karen Hanlon, now a Department of Homeland Security/Transportation Security Administration Attaché in the US Embassy in Warsaw, who spent many years in a male-dominated aviation industry in her homeland, and Agnieszka Hryniewicz-Bieniek, the CEO of Google Poland; not really related to the startup world, but definately able to recollect the challenges they faced as enterprenueurs and women on their way up and thus give advice to those at the beginning of the path.

For me, one of the goals of the evening was to talk to a panelist who, same as Ula and Marjorie, was included in Forbes 100 European Female Founders, and won the Romanian semifinals of Women Startup Competition. She was also the only startup founder in this panel that I have never wrote about or even spoken to, and her idea for business seemed really catchy.

I met Anca D. Goron minutes before the start of the meeting. It was her who found me in the end – a petite blonde came up and said: „Thank you for writing about me”. She meant an article in Polish that I published before the event and in which I mentioned the topics that would be touched and the speakers that would appear. The fact that she recognised me was perplexing: not only did she read a text probably roughly translated by Google, but also she paid attention to who its author was. It struck me at the beginning of the event but became perfectly clear by the end of it.

Her company doorie offers personalized hotel services by connecting hotel management and their clients. It makes it possible for the user to customize the hotel offer to his or her expectations using an algorithm based on AI.

Anca is from a Romanian city of Kluj-Napoca where she studied Computer Science and got her PhD on artificial intelligence. „This was the future and I thought it’s worth knowing as much as you can about it”, she explains. At  first, her interest in AI was purely scientifical. On the way from her Bachelor’s Degree to PhD she collaborated with her collegues on a series of papers concerning this subject and participated in conferences about it. Meanwhile, she started to work as a support technician and QA which led her to the post of Software Analyst and later on Product Manager in UNIQUA Raiffeisen Software Solutions. It seems to be an impressive career for those looking from the outside, but at some point of it Anca had a crisis: „I worked too much. Also, my relationship ended. Lucky for me, I had an opportunity to go to Argentina. It was there where I discovered that people who care for each other and talk to each other for real, not only saying: 'Hi’ but 'Hi, what have you been up to?,’ are the best that the world has to offer”. Her stay at the University of Buenos Aires where she participated in AI research led by the local scientists actually became a milestone for her today’s startup project: „I have always travelled a lot and I simply love hotels. I like it that they cater you. However, not everybody likes to be catered the same way, and some people may have unique needs that the hotels have never heard of. That is why my idea was to make this experience as personalized as it can get”.

Along with Kasia Dorsey, the founder of yosh.ai, Anca described her experiences as an enterpreneur during a panel hosted by Magda Przelaskowska from Campus Warsaw. Because the audience consisted mainly of people running their own startups or interested in launching ones, the question about financing was frequently repeated. Anca’s choice was unusual. She decided to invest her own money in the business, but as a young woman at the end of her PhD she didn’t have enough savings to do so and she decided to work both a day and night shift to earn the necessary sum. „It was demanding, but I was determined. Besides, I worked so much that I really didn’t have many opportunities to spend this money”, she said jokingly. 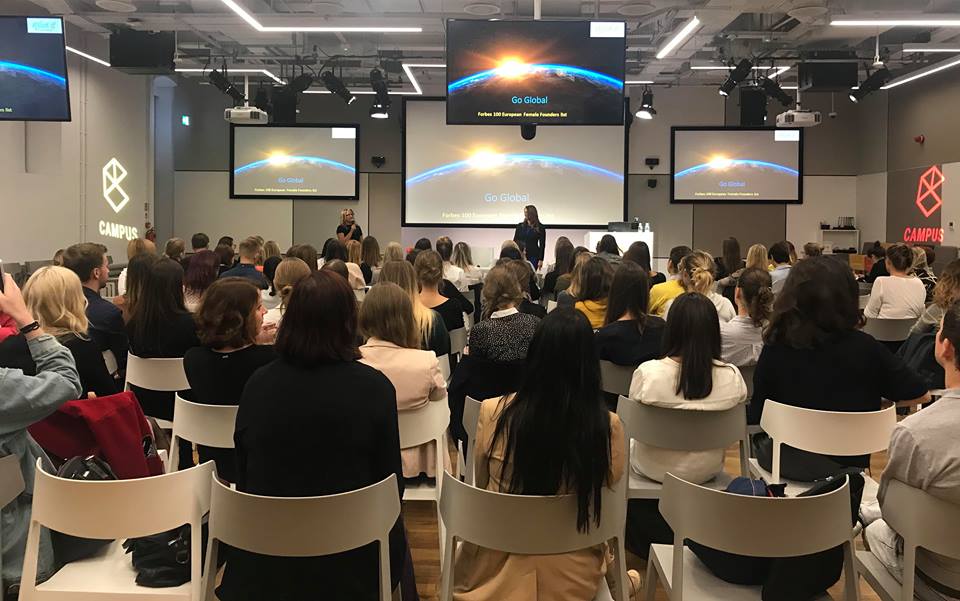 You often meet the people with this kind of attitude in the startup world. They are not superheroes. In fact, many of them portray their idea of launching a startup and their efforts to keep it afloat as a life-saving endeavour. That seems to be exactly the case of Anca, who managed to beat depression and move on not only with her professional matters once she started her business. However, it may look even simplier:  the market is full of people who tried their luck in startups and even if a great success never came, they knew they wouldn’t like to go back to a corporate work from 9 to 5. Giving one more try sounds risky, because you may invest everything and once again remain with nothing. However, as Kasia Dorsey once commented, startups and enterpreneurship in general are for gamblers. Sara Koślińska was even more straight-forward about it: „Don’t think too much if you are good enough to make it. You’re already awesome! And the worse thing that can happen is that you lose money. But the money is always there, one way or another”, persuaded the 28-year-old.

For Anca it was bootstrapping that made doorie happen. With enough savings on her account, she hired a developer and officially launched the app. After half a year, when money was needed again, a person whom she calls her dear friend and mentor came up with a solution: 'There is this event in Dubai where you can pitch to attract the potential investors, why shouldn’t you go?”, he asked. Anca jumped at the opportunity. 'That’s an everyday thing in the startup world. There are times when no money is left and no new opportunities arise, and yes, it gets you down. But just a couple of months later you pitch in front of a crowd of people, as the only female onstage, among a few dozens of other enterpreneurs, and you make it”. Dubai turned out to be a success for Anca. It is now one of the countries where doorie app operates. Next year it will become available in Germany and Austria.

When it comes to success, it is not only or hardly ever a result of an idea so brilliant that it makes every investor open their wallet right away. Every speaker in the event heard a lot of „no’s”. However, as Sara put it, once you are shown the door, you need to make your way through the window: „Everytime someone wasn’t interested, my co-founder and me asked: 'Ok, what should we change?’, 'What would make you reconsider?’, 'Can we go back to you in half a year?’, and we always did. That’s why many people who said 'no’ at the beginning, in the end became our investors or business partners”. Kasia added that sometimes a failure might unexpectedly turn into a success, like a pitching contest she actually lost but later one of the investors in the audience got in touch with her.

Failures are no longer a taboo since the tradition of „fuckup nights” began.  The speakers of this edition of Go Global didn’t avoid the subject though they also left no doubt that not every bad thing that happened turned out great in the end. When it came to discussing the choice of a co-founder, Anca admitted that the wrong decision she made led to closing her first startup. Even if the general rule is that a more business-oriented person should seek for a technology-oriented partner, there is more to making an ideal match than just a simple combination of necessary skills: „It’s like marriage”, Anca said. „It’s not going to work out with anybody just because they have what you lack and vice versa. So you have to take your time and choose wisely”.

Because in the end, even though it seems to be all about technology these days, people are crucial. If Anca didn’t restore her faith in human relations in Argentina, she would not come up with the idea of doorie. All of the speakers, regardless of the environment they represented, underlined the meaning of networking. Karen Hanlon advised the listeners to „become a connector and remember to reconnect” and also to help people when they ask for it so that they are more likely to return the favor. Agnieszka Hryniewicz-Bieniek called herself „a dreamer” who never actually aimed for any particular post in any particular company, but she pursed her passion and attracted people who were thinking the same way. Thus she came to a conlusion that nothing was impossible with the right attitude and team. 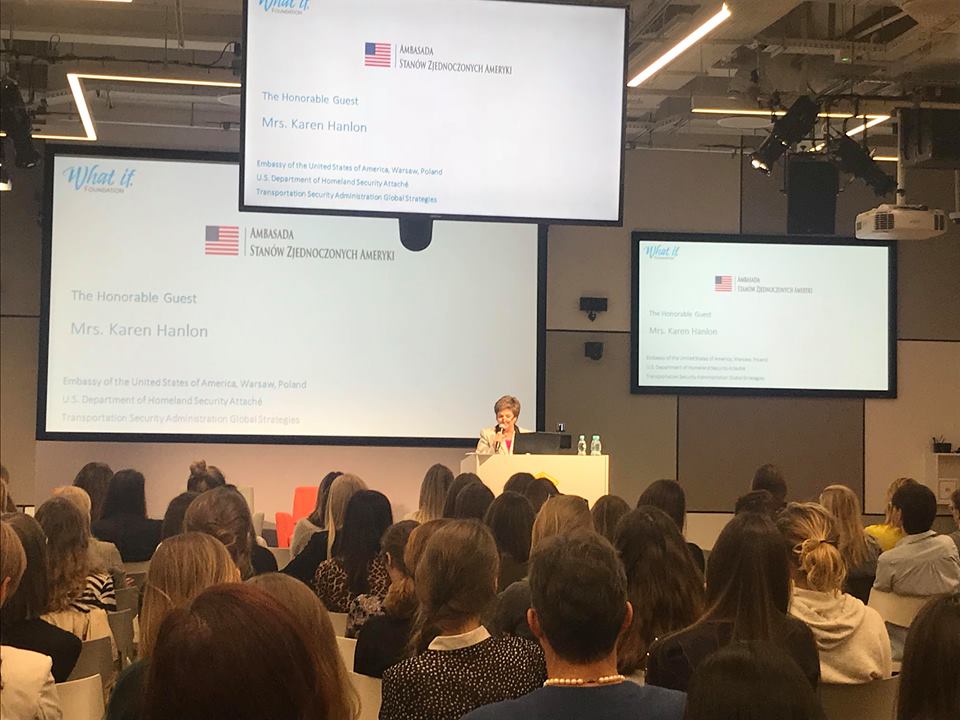 The ways that lead to success in business may be different and not everything that worked perfectly in one case may bring the same result in another. That’s why all the advice given may seem somewhat general. But in the end the one and only way to see for yourself is try. That’s what the activity of What If Foundation is all about: to get women to just do it despite any self-doubt or fear they may be struggling with. „We started this fund with Kasia”, Renata Bogdańska told me, „after we realised that we repeatedly asked ourselves the same question: What if? One day, we decided to find the answer”.